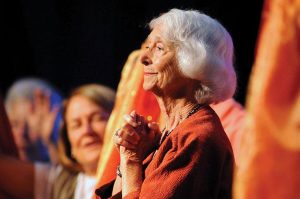 She helped introduce the worldview of conscious evolution into the world,
calling this an epic evolutionary shift from Homo sapiens sapiens toward Homo universalis,
a new human and a new world.

Perhaps this tribute by Karen Wilhelm Buckley best captures for me the greatest of the wisdom that I have gained from Barbara Marx Hubbard and that it is my hope and intention to carry forward into my work with Heart Plan Vision.
– Shema Satya

A Tribute to Barbara Marx Hubbard
by Karen Wilhelm Buckley

“Our projects ultimately cannot be any greater than we are as persons.”

Barbara Marx Hubbard’s passing this week touched my heart. I am celebrating her great visionary projects and our shared lifelong commitment to living conscious evolution. Perhaps she’s tapping me on the shoulder because I feel called to share this. In 2003 we shared a moment in her kitchen I’ll remember forever when she said, “Our projects ultimately cannot be any greater than we are as persons. “

At 74 years old Barbara felt the challenge of remaining alive in her essence as she manifested her projects, as we all do. I’m moved again as I read this quote, and then an excerpt of Barbara’s intimate story from the Wisdom and Power of Women Leaders.

“I call it the path of the co-creator. Because the genius within us and the planetary crisis we’re in is calling us out to the furthest possible reach of our capacity. But if in reaching out to come into action and form we lose touch with the divine essence of our being, the action then loses its essence and the person loses its presence and its own evolutionary potential. “

TRANSCRIPT EXCERPT, 2004 Forum,
The Wisdom and Power of Women, at WBA Conference.

“Such a joy to be sitting here. I’ll just share with you briefly what happened between Karen and myself. I had been at so many meetings that I was beginning to have a very strange experience. I’ve noticed that every project I have right now is coming into form.

It has been, in my case, a very visionary life. But with all exception they’re all happening, and I’m not used to that. (Laughter). I actually think it’s a lot easier to inspire than to actually see it manifest because then you have to get into business. You have to get into the substance of it. And as I was going deeper and deeper into helping things manifest, I was losing contact with the source of the inspiration in the first place.

And I noticed that through all these meetings I was going to, when everything was working, that there was inside me a knot of anxiety not related to things not working. It was actually related to them working so well.

And I began to realize that the essence of the being that has motivated me is anxious as I come into form and deal with the business of things on all levels.

What happened for Karen and me that was so helpful to me, was that I had a chance with her to speak direct, intimate essence with essence. I was able to share the feeling of anxiety. I said Karen I think I may be having an identity crisis. See, I’m supposed to know what I’m doing. (Laughter)

The identity crisis seemed to be that the essence of my being now wanted me to pay such profound attention to it so that I could incarnate what I am as I am putting it all into my project.

What my essence was saying to me in this moment, “Barbara, you have spent 40 years deeply engaged in inspiration and hoping to create some things. But I essence want you to notice that the most important thing now is if you could embody me the whole way as a being.”

And I started to realize I didn’t know how to place the spectrum of really focusing on the beingness and incarnating the beingness as a whole woman, while I’m coming into form in the world. I’m sure everyone faces that to some degree. And when Karen and I spoke, it was a clue that deep communion with two or more is one of the things that helps us to be able to deepen our incarnation into human presence while coming into form.

Because in all the meetings I’d been in I was not being my deepest self, because there’s no protocol for it. There’s no occasion. The deep self goes back and back and I lost it. It’s like I lost the vibration of the internal being.

And then Karen if I may say so, was having a similar experience in meeting after meeting. And I wonder how many people in all these meetings, ever lose contact with essence. (Lots of Laughter).

So, I came back today with fear and trepidation that I might lose it again, which seems ridiculous after all these years of efforting.

But it leads me to a really interesting evolutionary observation. It occurs to me that our projects will take many, many years to fully manifest at the transformational level that we know. Five, ten, twenty years. However, the persons doing the projects are very advanced right now. In other words, the projects have been deep, deep workshops for personhood.

And in some respects, I began to realize that the most immediate product from the projects was the person that we have become. But we haven’t noticed it fully enough because we are tending the projects. And if we ever talk to ourselves, we immediately jump into our projects. “I just did this, I just did that, this happened.” And the self that did it all is not talking to the deep selves that really did it all.

So, I am now committing at the deepest part of my being to understanding what I call the essential self, which for me is the incarnation of the divine of each person that has within it a particular genetic genius code that deeply wants to express itself into creative action, of which free enterprise is the best form of doing it. There is no doubt about that.

I call it the path of the co-creator. Because the genius within us and the planetary crisis we’re in is calling us out at the furthest possible reach of our capacity. But if in reaching out to come into action and form we lose touch with the divine essence of our being, the action then loses its essence and the person loses its presence and its own evolutionary potential.

Our projects ultimately cannot be any greater than we are as persons.”