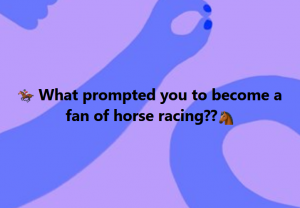 Shema:  I found this question on social media and was inspired to reflect and wrote the following.

As a kid, I loved horses so much. And I was a city girl. And even though I begged for a pony in our backyard, I never got one.  So I focused on model horses, horse books from the library, Mom reading me The Black Stallion at bedtime.
Then I found a way to be with actual horses!  Walking Polo Ponies during Sunday matches, helping them to cool down, I got paid $1.00 for a full afternoon of cooling down hot sweaty strong polo ponies!   And their were riding lessons on Saturday at Golden Gate Park in San Francisco.
Our local newspaper had a great sports section, with lots of good pictures of horse racing. So I started to collect the pictures and make a scrap book.
Then I made 3×5 index cards of the horses running at Golden Gate Fields. I would study how they were doing, and I would wager who would win. My Dad would give me pennies for my horses who won.
At that point I discovered that the Triple Crown races were on TV so I started to watch them, and the excitement for the sport grew.
I got Blood Horse magazine and learned about Man o’ War and the special edition they had on him.  Then I found out that March 29 was both our birthdays – and I was full on in love at that point.
When Secretariat arrived on the scene, they both were called Big Red and had a similar white blaze – I started to fantasize Secretariat was Man o’ War reincarnated – because he wanted to win the Triple Crown.  That Belmont win was other worldly!
I later looked up the time of birth of Secretariat, and he too would have been born on March 29 – except that his birth was very early on March 30.  I decided that was more confirmation they were the same soul.
There was another fact that really mesmerized me.  That Man o’ War and Secretariat both ended their careers with a last race in Canada.  What are the chances of that! *  I also loved that they both had black grooms that loved them each dearly.
By then, I was hooked on horse racing.
Zenyatta brought the flame alive again, after I had drifted away, busy with life.
Then California Chrome!
and then 2 Triple Crown winners American Pharoah and Justify.
Thanks for the question. It was fun to write this all out.
* “After the Man o’ War, just one race was left on Secretariat’s schedule. He would run his final race in Canada, the homeland of both trainer Lucien Laurin and jockey Ron Turcotte. Then Secretariat would be retired to stud in Kentucky.”  (secretariat.com)