“A great spiritual teacher gathers pure souls around him and teaches them, not only by word of mouth, but by actual transmission of spirituality.  He does not simply give them self confidence; he actually illumines  the hearts of his disciples and makes them the light of the world.  For only those who have obtained illumination through union with the light which dwells in the hearts of all can become the light of the world.  Only such illumined ones are fit to teach mankind; only they can carry on the message of a divine incarnation.” 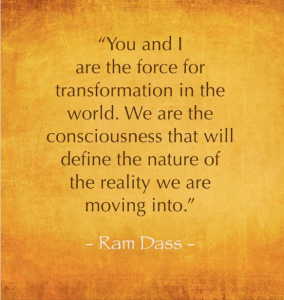 A beautiful tribute to Ram Dass by Jack Kornfield
on Ram Dass’ passing
12.22.19