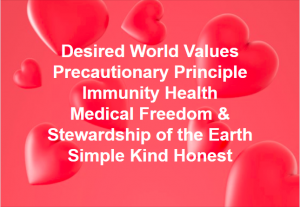 At same time, may WE vision a better world for ourselves and seven generations out
And instill those images into the morphic field*

* A morphic field was an energy-like field that defined the entire biology of all living beings. The idea was first put forth by a scientist named Sheldrake in the 20th century. It provided a force that guided the development of an organism as it grew, making it take on a form similar to other species.